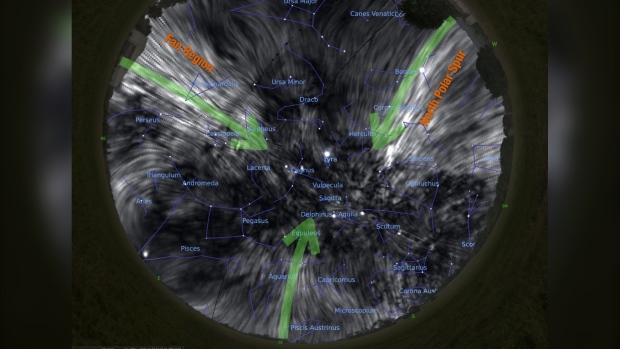 A magnetic tunnel may surround our solar system: study

TORONTO – Our entire solar system and some nearby stars could be surrounded by a vast magnetic tunnel, according to a Canadian scientist who has developed a unified theory to explain two features that exist in space.

In a radio map of the night sky, the north polar spur and the fan region are two bright gaseous, tendril-like features in our galaxy, which emit a large amount of radio waves in many frequencies. Although they are on either side of the sky, new research suggests that they are in fact connected.

“If we were to look up into the sky, we would see this tunnel-like structure in just about every direction we look, that is, if we had eyes that could see radio light,” Dr Jennifer West, Research Associate at the Dunlap Institute for Astronomy and Astrophysics with the University of Toronto, said in a press release.

West and the lead author of the new research propose that the north polar spur and the Fan region are part of a huge magnetic loop around our solar system, about 1,000 light years long.

The North Polar Spur is a ridge of hot gas in our galaxy that emits radio waves and x-rays. Although it has been observed for decades, there is no consensus on its exact proximity to Earth. Theories range from the edge of the local bubble, a structure that has formed around us from exploding supernovae in the Milky Way, to the edge of a larger structure much further away, possibly describing a huge cavity in space.

Likewise, Fan Region refers to a feature that produces a huge amount of radio waves and is invisible to the naked eye.

According to this theory, the two are part of a tunnel that has its own magnetic field and is made up of charged particles, circling Earth about 350 light years away.

A new paper published in prepublication in the Astrophysical Journal points out that the north polar spur and the fan region exhibit similar characteristics, such as “high fractional polarization and coherent magnetic fields” as well as cosmic ray electrons. Using computer modeling, the researchers found that if these two structures were connected by magnetized filaments, it largely matched observational studies.

Previous research on the North Polar Spur and the Fan region has focused on them individually, but this is the first to see them as part of the same system.

West created a model that allowed her to imagine what the radio sky would look like from Earth itself, so she could define what that magnetic tunnel would look like if a person observed the sky from different places on Earth.

This allowed him to cross these sky projections with existing data.

In an image of the New Research sky as it would appear in polarized radio waves, the lines appear to curl inward like the lines in a tunnel would as they recede.

She said in the statement that her team drew on an article from 1965, when data was much more limited, which “assumed that these polarized radio signals could come from our view of the local arm of the galaxy, from the ‘inside’.

The local arm, also known as the Orion arm, is one of the spiral arms of the Milky Way galaxy, specifically the one in which our solar system is located.

“This article inspired me to develop this idea and link my model to the much better data our telescopes provide us with today,” she added.

An important step was to think about the orientation of the sky from a different point of view, West said. While astronomers generally think of the sky in one orientation, having an “Upward Galaxy” and a “Galactic Center”, this center can be tilted to draw a new map that offers new perspectives, much like a map of the sea. Earth that centers the Pacific Ocean instead of the Atlantic would be very different.

Dr Bryan Gaensler, a professor at the Dunlap Institute and one of the authors of the article, said in the statement that he thought this theory was “too ‘out there'” when West l ‘presented for the first time.

“But she finally managed to convince me!” Now, I can’t wait to see how the rest of the astronomy community reacts.

Magnetic fields in space, and what they mean, are still a source of mystery in many ways. The researchers say in the article that this model could help create a holistic model to better understand magnetic fields in galaxies as a whole.

“We still do not fully understand the origin and evolution of regular magnetic fields in galaxies and how this field is maintained,” the study said.

West added in the statement that magnetic fields all connect and interact with each other in one way or another.

“A next step, therefore, is to better understand how this local magnetic field connects both to the larger-scale galactic magnetic field, as well as to the smaller-scale magnetic fields of our Sun and Earth.”