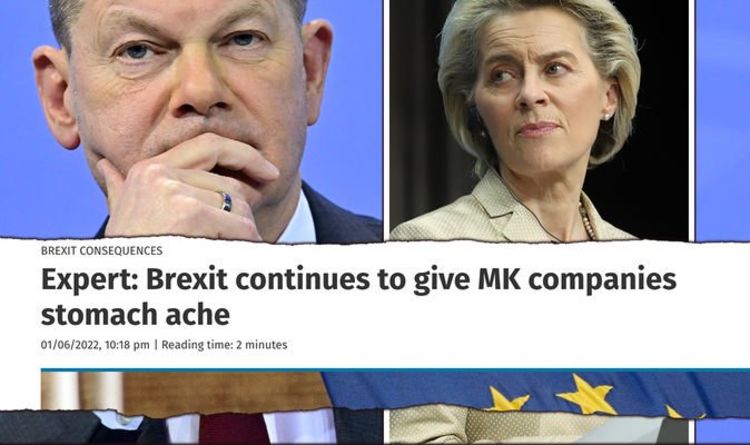 Britain ended nearly 50 years of EU membership on January 1, 2021, completing its official departure from the bloc after the two sides signed a post-Brexit trade deal at the eleventh hour. Boris Johnson continued to insist that with Brexit, Britain will flourish outside the EU, free from the shackles and rules that Brussels has brought for nearly five decades. Several pro-EU supporters across the continent mocked the UK and insisted that the once popular member state would suffer as a result of being outside the bloc.

But a German newspaper and website have expressed growing fears about the impact Brexit is starting to have on businesses across the country.

Westfalenpost posted an article on its website titled ‘Brexit continues to give businesses a stomach ache’ in which it begins by saying that the Chamber of Commerce has warned that domestic business trading will become increasingly difficult with the the relief expires in the first year of Brexit.

The editorial explains that since this point arrived on January 1, several unilateral transitional rules in the UK for imports of goods from the EU have expired.

This was underlined by recent comments from Frank Herrmann, foreign trade expert for the South Westphalian Chamber of Commerce and Industry (SIHK) in Hagen, who explained some of the difficulties German companies are currently facing.

Some 450 from the SIHK district of Hagen in the state of North Rhine-Westphalia, which also includes Menden and Balve, already export goods to Britain.

About a third of them import from the UK, while 200 have offices and 50 subsidiaries.

Five companies have production facilities in the British Isles and two in Ireland.

Mr Herrmann said: “Our domestic businesses should now expect increased customs checks on the UK side – even though many of the island’s national customs offices are not yet connected to the EU’s electronic transit system. .

READ MORE: Spain depends on Scotland as EU fishermen shoot themselves in the foot

“British polls have shown that this is often not the case.

“In the area of ​​logistics in particular, other issues can arise at the start of the new year, which can put additional strain on the supply chain.”

The editorial also warned that the rules for the provision of services in the UK would be further tightened.

“When it comes to agile trade policy, however, the EU can learn a lot from Britain when you see how quickly Boris Johnson’s government is concluding new free trade deals.”