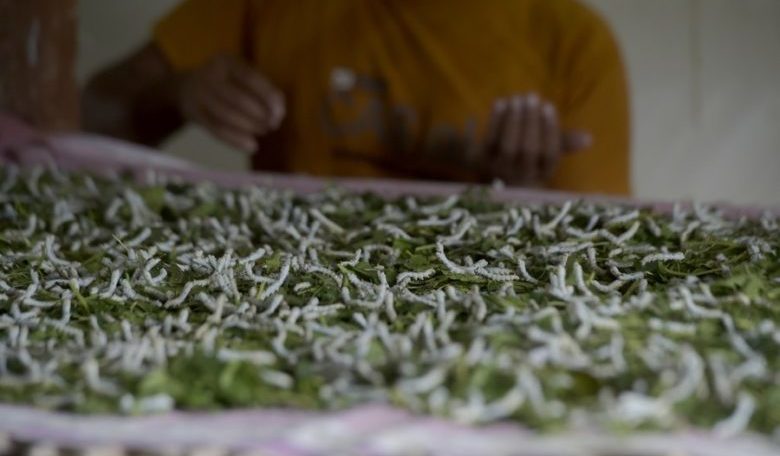 New York: Researchers at the Massachusetts Institute of Technology (MIT) in the United States have developed a biodegradable silk-based system to replace harmful microplastics added to agricultural products, paints and cosmetics.

Microplastics, tiny plastic particles now found in air, water and soil around the world, are increasingly recognized as a serious pollution threat and are found in the blood of animals and humans all over the world.

Unlike the premium silk yarns used for finer fabrics, the silk protein used in the new alternative material is widely available and less expensive.

While silkworm cocoons must be painstakingly unwound to produce the fine threads needed for fabric, for this use, non-textile grade cocoons can be used, and the silk fibers are simply cut in evolving water – can be dissolved using a process based.

Processing is so simple and tunable that the resulting material can be adapted to run on existing manufacturing equipment, potentially providing a simple “drop-in” solution using existing factories, the team explains in “Small” magazine featured in an article.

“We can’t solve the whole microplastics problem with one solution that fits all. Ten percent of a big number is still a big number. We can’t find a solution,” said Benedetto Marelli, Professor of Civil and Environmental Engineering at MIT In time, one percent of the world will solve climate change and pollution.

Silk is considered safe for food or medical use because it is non-toxic and naturally degrades in the body. In laboratory tests, the researchers demonstrated that the silk-based coating material could be used in existing standard spray manufacturing equipment to make it soluble in standard water.

The microencapsulated herbicide product was tested in a greenhouse on a corn crop. Tests showed it worked even better than an existing commercial product, causing less damage to plants, said Muchun Liu, a doctoral student at MIT.

The secret to adapting the material to existing equipment, Liu explained, lies in the compatibility of the silk material.

The material can be hydrophobic (water-repellent), whether formed and cured in an aqueous solution, or it can be hydrophilic (water-attracting), or anywhere in between, and for a given application. Because it can be made to match the characteristics of the material used to change it.

The new method could use low-grade silk that is unsuitable for clothing, and large quantities of which are currently thrown away because they have no meaningful use, Liu said. It can also use used and discarded silk fabrics, disposing of this material by disposing of it in landfills.

Japanese food companies are accelerating their move away from plastic packaging