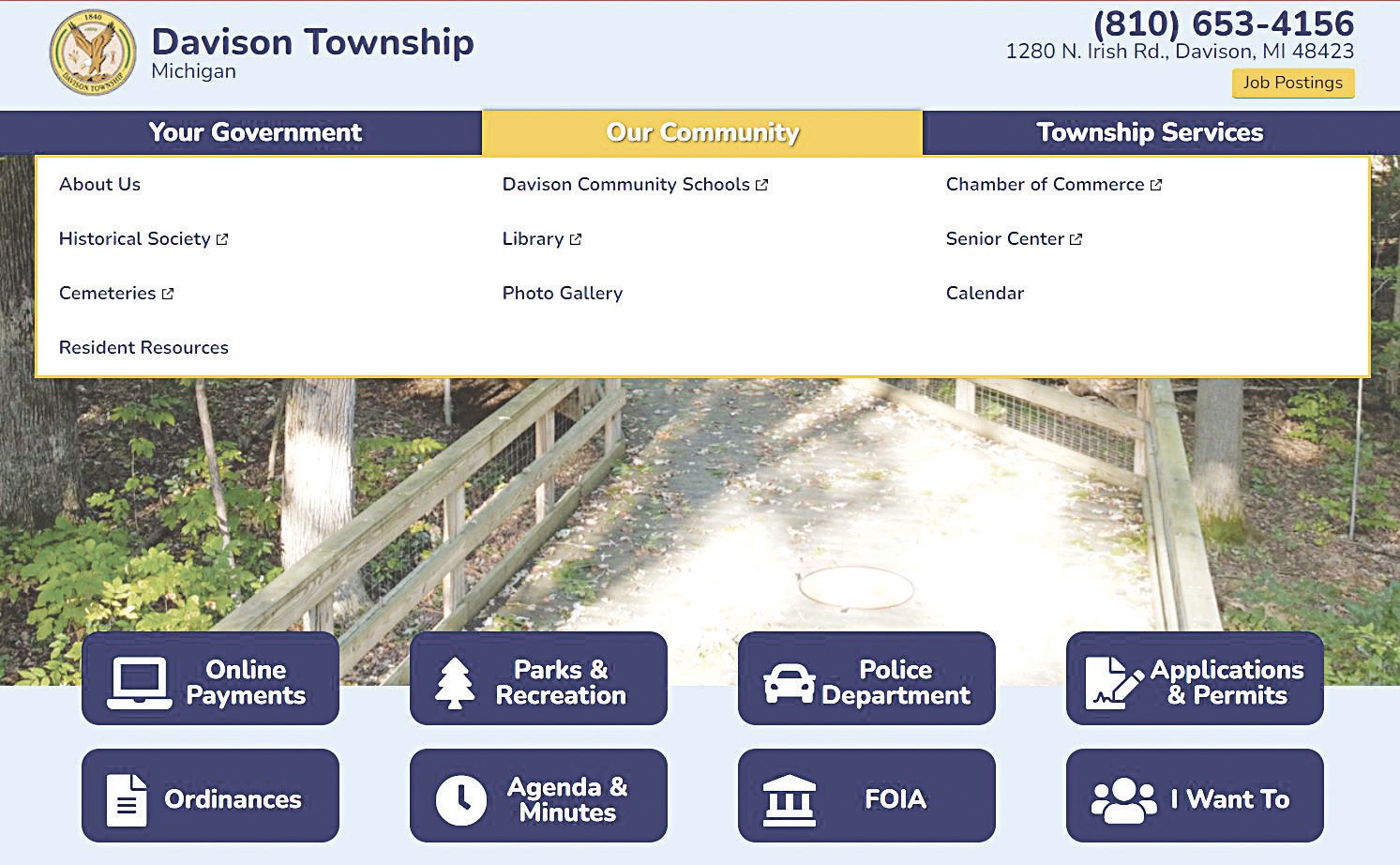 The launch of the new website, however, came with some criticism from a township administrator unhappy with the process – or lack thereof – for selecting a vendor and paying for the work.

Trustee Lori Tallman disputed an expense in the township’s bills Aug. 8 for the township’s new website. She said the board never selected a vendor, or agreed what the vendor should be paid to build and host the site.

She also expressed some dissatisfaction with the functionality of the new website and the accessibility required.

“I’m not too thrilled with the design of the website, for example, if someone goes to the website, the administrators’ email addresses aren’t there,” Tallman said. “If someone wants to email a trustee, it’s not easy for them.”

She also took issue with the fact that the site is not an Americans with Disabilities Act complaint for the hearing impaired and has no disclaimer about ADA compliance — which is required.

“A person with vision problems would have trouble with that,” she said.

Supervisor Jim Slezak said the board had budgeted $20,000 for the new website, so in his opinion, he had already been approved by the board to spend that money.

Tallman argued that the budget was approved, but not the vendor or the expenses, citing board guidelines that any expenses over $5,000 must receive board approval.

“My understanding was that there was an amount to budget to get this work done, but hiring someone to do the work — that had to come back to the board,” Tallman said.

Slezak said Tallman was on the committee and worked with the vendors, so he wondered what the problem was with the expenses.

She said the discussion in the committee, which she served on, was simply to narrow down the vendors and select 2 or 3 names and offers to present to the board. This, Tallman said, was never done.

As for Tallman’s criticisms of the site, he called it a “work in progress.”

Green said the Lansing-based web design company, Shumaker Technology Group, is putting those things Tallman asked about on the township’s website and more.

For the building department and other departments, he said all forms for the public will be able to be filled out on the website.

Additionally, an archive is being created for township meeting minutes and ordinances so residents can search as easily, Green said.

“What you just said, I don’t understand because we emailed everyone that if you have any suggestions or anything, please let us know,” Green said. “I don’t remember seeing an email from (Tallman).”

He said Tallman chaired the committee when it was first created, but he claimed he was “getting nowhere,” so the administration stepped in and took over.

Tallman asked township attorney David Lattie if the administration should have reported any expenses over $5,000 to the council for approval before proceeding with the website redesign.

“Normally when you have a budgeted amount, it’s a legal expense,” Lattie said. “So what you have now is you want to approve this? You have it on the list of bills to pay. Anyway, it still needs to be approved by the board – either before, or in arrears.

Tallman returned to the question of whether the supplier and expenses had to be approved by the council first rather than after the work was completed.

Shumaker Technology Group has developed many other websites for city government and seems like the best option, Green said.

Lattie agreed, saying there was nothing improper about the way the website evolved, the issue is how the board wants to handle payment approval.

Tallman said that in the future, if the board chooses not to approve an expense after the fact, the bill may not be paid.

“Going forward, when we have expenses of this size, we will need board approval,” Tallman said.

Slezak agreed and said that going forward, the board should decide how it wants to handle future expenses. The council voted unanimously to pay the bill.