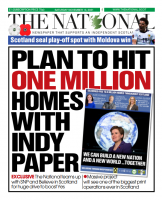 A former editor has returned to help his former colleagues produce a special political newspaper with a million copies.

Richard Walker, who edited Glasgow-based headlines, the Sunday Herald and the Sunday National, joined forces with their sister newspaper Newsquest, The National, to create an eight-page pro-Scottish independence newspaper.

The special edition was produced in conjunction with the Scottish National Party and lobby group Believe in Scotland, for which Richard now oversees content strategy.

The National revealed on Saturday’s front page, pictured below, that a million copies of the special newspaper will be distributed to SNP branches across Scotland.

Richard, who lobbied unsuccessfully last year to become the SNP’s candidate for Scottish Member of Parliament in Ayr, said: â€œThe Yes movement working together is stronger than its building blocks and I hope it is. The project marks the start of a collaborative approach combined with a positive vision of Scotland as an independent country that is proving sufficiently powerful and attractive to convince voters that it offers the best hope for our country’s future. “

Callum Baird, editor of The National, added: â€œIt was great to reunite with Richard – as editor of the Sunday Herald when he published Yes before the referendum, many in the movement are already familiar with his contributions. important.

â€œWe are really proud of what this collaboration has produced. “

Searching for payday loans with 100% guaranteed approval? Here you will find them