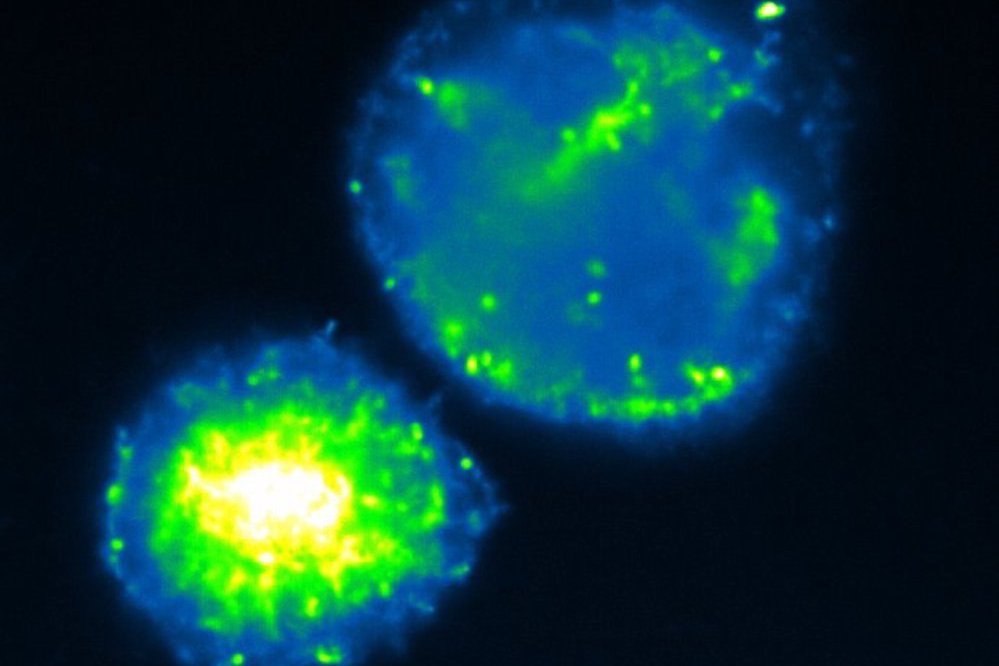 Cooperation is central to the life of many organisms, ranging from microbes to complex multicellular life. It occurs when individuals share resources or allocate a task in such a way that each derives greater benefit from acting together than they could on their own. For example, birds and fish flock to escape predators, slime mold swarms to hunt for food and reproduction, and bacteria form biofilms to resist stress.

To study this problem, MIT professor Otto X. Cordero and his colleagues were inspired by nature: they developed a model system around a common coastal seawater bacterium that requires cooperation to eat the sugars in brown algae. In the system, individual cells were initially suspended in seawater too far from other cells to cooperate. To share resources and grow, the cells had to find a mechanism to create a neighborhood. “Amazingly, each cell was able to divide and create its own neighborhood of clones by forming tight clusters,” says Cordero, associate professor in the Department of Civil and Environmental Engineering.

A new article, published today in Current biologyshows how an algae-eating bacterium solves the technical challenge of creating local cell density from a single-celled state.

“A key finding was the importance of phenotypic heterogeneity in supporting this surprising mechanism of clonal cooperation,” says Cordero, lead author of the new paper.

Using a combination of microscopy, transcriptomics, and tagging experiments to profile a cellular metabolic state, the researchers found that cells phenotypically differentiate into a sticky “shell” population and a mobile carbon-storing “core.” The researchers propose that shell cells create the cellular neighborhood needed to maintain cooperation while nucleus cells accumulate carbon stores that promote clonal reproduction when the multicellular structure breaks down.

This work addresses a key part of the larger challenge of understanding the bacterial processes that shape our earth, such as the carbon cycle from dead organic matter to food webs and the atmosphere. “Bacteria are basically single cells, but often what they accomplish in nature is through cooperation. We have a lot to discover about what bacteria can accomplish together and how that differs from their ability as individuals,” adds Cordero.

Co-authors include Julia Schwartzman and Ali Ebrahimi, former postdocs at the Cordero Lab. Other co-authors are Gray Chadwick, a former Caltech graduate student; Yuya Sato, senior researcher at Japan’s National Institute of Advanced Industrial Science and Technology; Benjamin Roller, currently a postdoctoral fellow at the University of Vienna; and Victoria Orphan of Caltech.

Peter Botting: Our government has a great website. We shouldn’t be embarrassed to say so.