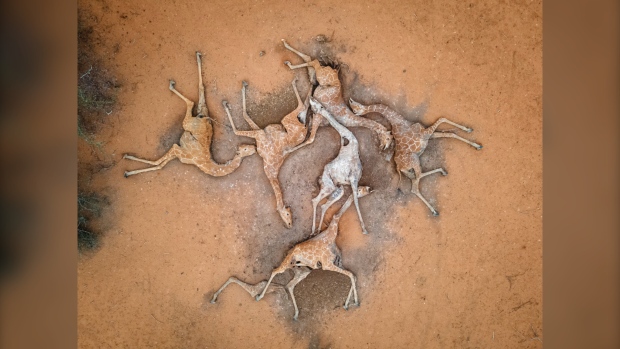 Photo of dead giraffe shows toll of drought in Kenya

An aerial photograph showing six dead giraffes in Kenya illustrates the devastation of the ongoing drought in East Africa.

Photojournalist Ed Ram, who captured the grisly image, says the giraffes were weakened by the lack of food and water. They died after trying to drink from an almost dry tank and got stuck in the mud.

Star Kenya, a local newspaper, reported that more than 4,000 giraffes in the region are at risk of dying. Officials told the newspaper they plan to send tankers to help wildlife in the worst affected areas.

The newspaper also reported that agricultural activities along the river cut off access to water for giraffes and other wildlife.

Kenyan President Uhuru Kenyatta declared the drought a national disaster in September as it wreaked havoc on wildlife, agriculture and livestock. In October, parts of the country experienced low levels of precipitation not seen since 1981, according to a UN report.

“Water sources for people and livestock have dried up, forcing families to travel longer distances and causing tensions between communities, which has led to an increase in inter-community conflicts,” the report says. ‘UN.