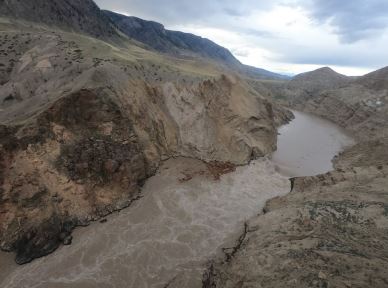 A team of researchers from Simon Fraser University have returned to the Big Bar site, as part of a project to prevent future salmon extinction events.

In 2018, a landslide blocked the Frasier River at the Big Bar site, blocking the river’s channel to salmon trying to spawn on its land in the Upper Fraser Basin.

School of Environmental Science and Geography SFU Professor Jeremy Venditti explains the work being done at the Big Bar site.

“Our investigation began as an investigation into what happened at Big Bar and how Big Bar affected Fraser River salmon, but gradually expanded to how it affected a number of sites in the Fraser Canyon looking for landslides, trying to figure out where they might occur in the future.

He says what triggered the Big Bar landslide in 2018 was interesting to them.

“We wrote a paper, an academic paper in 2014 where we predicted whether events like big bass were going to happen in rivers, largely because the way water flows through the canyon like in the big bass, it dries up the water and sediment on the side of the canyon walls and it tends to erode them, and then whatever is on it, tends to erode them, and then it falls into the river.

As part of their research on the site, Venditti says they use an instrument called a lightbar to measure the typography of the earth’s surface.

“So what we’re doing is we’re looking for features on the surface of the earth that indicate there have been landslides in the past, our ultimate goal is to find places where landslides land occur in the Frasier Basin, and then to also try to tie an age for them.”

By attaching an age to the rock, Venditti says it helps them understand a few different things.

“First of all, where do the landslides occur, second, their size, because we can measure the size of a landslide from our light bar, and then we can also measure the age so that we can to determine how often we might expect landslides of a particular size to occur in the Fraser Basin.

He says their ultimate goal is to find a mathematical model to determine when the next landslide might occur, like the landslide that happened at the Big Bar site.