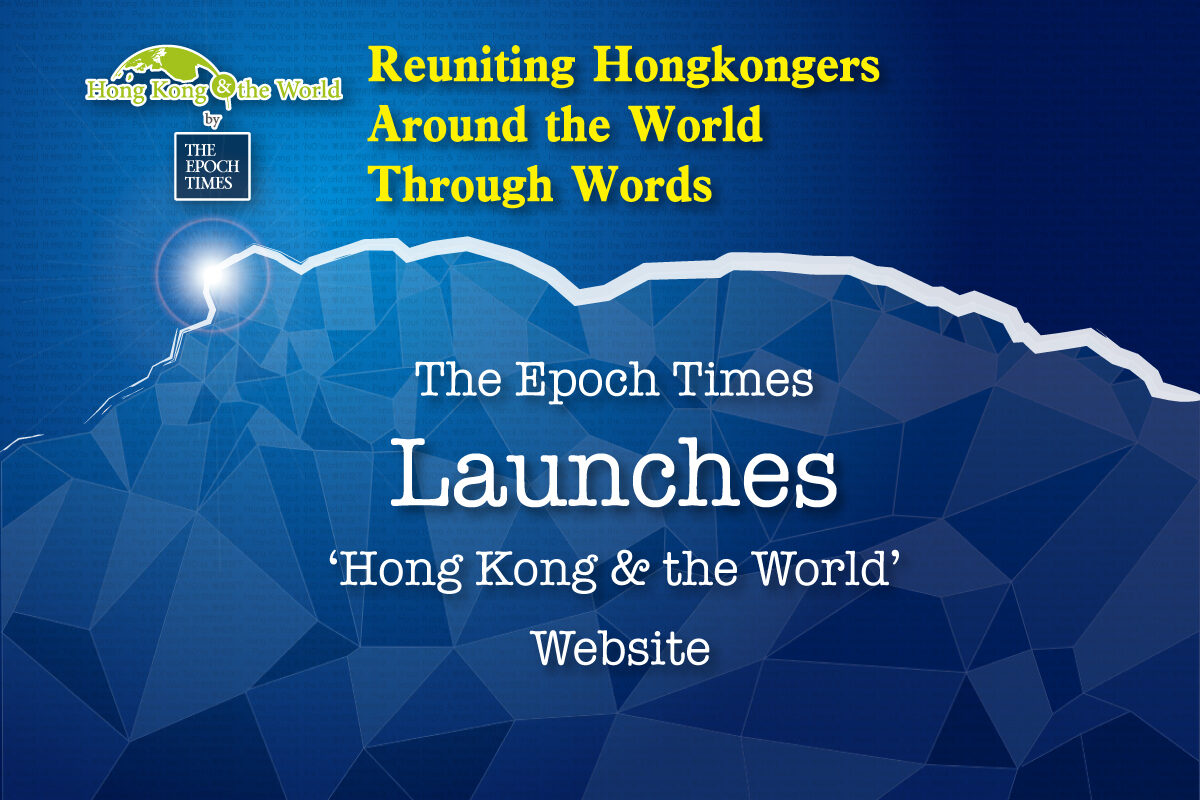 The Epoch Times Launches “Hong Kong and the World” Website

Hong Kong is a place full of miracles, a famous international city in a small place, with more than 7 million proud Hongkongers working hard in this blessed land free from natural disasters, creating a prosperous society with a fusion of Chinese and Western cultures. .

Unfortunately, the CCP broke its promise. China’s national security law dominates Hong Kong’s decision, violating the “one country, two systems” principle. Civil society collapsed and freedom of the press disappeared. Hundreds of thousands of Hong Kongers have moved overseas to find a new life; but many more stayed at home, still clinging to their beliefs and waiting for the dawn.

Hong Kong needs global attention. We create and dedicate the “Hong Kong and the World” (世界的香港) website to report news about Hong Kong and Hong Kong people, in the hope of saving this precious and once splendid pearl of the world from sinking.

As the world’s economic and financial center, Hong Kong enjoyed one of the freest economies with its independent judiciary, low tax rate, professional talent and free trade system. This Asian financial hub topped the Heritage Foundation’s Index of Economic Freedom for 25 years to 2021. It has been repeatedly crowned the world’s most competitive economy by the International Institute for Management Development (IMD ) based in Lausanne, Switzerland.

Hong Kong is also a member of around 50 international organizations, including the Asia-Pacific Economic Cooperation (APEC) and the World Trade Organization (WTO).

In 2021, the Heritage Foundation’s Index of Economic Freedom excluded Hong Kong because its economic policies are “controlled from Beijing”, the Heritage Foundation said. In the first five months of this year, fundraising for the Hong Kong IPO hit a new 12-year low. Nearly half of European businesses in Hong Kong plan to relocate all or part of their operations and staff out of the city, according to a report by IFC Media, citing a survey by the European Chamber of Commerce in Hong Kong. Asia’s global city is losing its professionals and foreign capital; the attractiveness of Asia’s main financial center is failing.

Hong Kong, an international transport and logistics hub, enjoys its image as a world-class transport hub with Hong Kong International Airport, container ports and cruise terminals. Hong Kong was the first choice for regional offices and headquarters of many large companies around the world. It was also the location of many international events, playing an active and important role on the world stage.

Hong Kong, the international and Asia-Pacific legal hub, is the only common law jurisdiction in China. The independent judiciary and non-permanent judges of the Court of Final Appeal in various countries enjoyed a good reputation and were highly valued by the international legal community. The courts exercised judicial power without interference.

Since the anti-extradition bill movement erupted among millions of Hong Kongers in 2019, the Hong Kong government has detained more than 10,000 Hong Kongers, including middle school students. It has become the norm for pro-democracies and protesters to be imprisoned without trial. There are now 1,014 political prisoners in Hong Kong, an exponential increase in the three years since mass protests began on June 9, 2019. At that time, there were only a handful of political prisoners. According to a new report from the Hong Kong Democracy Council (HKDC), “Hong Kong has one of the fastest growing political prisoner populations in the world, rivaling Belarus, Burma and Cuba,” the report said. The resignation of an Australian judge and two British judges from Hong Kong’s Court of Final Appeal sends a message of mistrust in judicial impartiality in the city.

Hong Kong was once an information hub with well-developed communications and a free flow of information, enjoying a high degree of press freedom. The media industry flourished with award-winning journalists and disseminated diverse information. According to the World Press Freedom Index, among 180 countries and regions in the world, Hong Kong’s ranking has fallen from 18th place in 2002 to 148th place in 2022, and now lies between the Philippines and Turkey. . Hong Kong’s largest pro-democracy newspaper, Apple Daily, and popular news site Stand News were forced to shut down. Small media have voluntarily closed due to legal risks and journalists have been arrested for national security crimes. The CCP suppresses independent cultural organizations, stifles their space for survival and development, and monopolizes the narrative of cultural discourse in Hong Kong.

Hong Kong is a center of exchange of Chinese and Western cultures. The world should remember and keep hope for Hong Kong – a unique wealth of traditions that retains traditional Chinese culture and spirit, which has not been destroyed and defiled by the CCP, and absorbs the universal values ​​of West.

Hong Kong, a name that was once admired and cherished, is now rocking in despair. The history and advantages Hong Kongers were proud of disappeared overnight, along with the “one country, two systems” policy, after the CCP violated the Sino-British Joint Declaration by forcibly enacting the “Law on Hong Kong’s national security”. and move to global and direct administration from Hong Kong.

In such a difficult environment, at least 110,000 Hong Kongers have emigrated to the UK after the British government launched the British Passport (Overseas) (BNO) scheme. Net emigration from July 1, 2020 to April 2, 2022 reached 325,497. Fortunately, Hong Kongers remain in dignity wherever they go. While living in harmony with the local people, many Hongkongers are still working hard for Hong Kong’s democracy and freedom.

Hong Kong, the Pearl of the Orient and one of the Four Little Dragons of Asia, should not be reduced to one of the cities under the direct totalitarian rule of the Chinese Communist Party. Hong Kong’s unique sense of belonging must be preserved, before it disappears completely on the international scene. Hong Kong people should protect the global wealth they have developed and pay attention to Hong Kong people at home and abroad.

Hong Kong belongs to the world with its core values ​​inherited from a combination of Chinese and Western cultures. It is on this basis that we have created this web page:

At this special time, we hope that all countries in the world will continue to help Hong Kong until Hong Kong regains its splendour. We also hope that the journalists and people of Hong Kong with this aspiration will support us in this great endeavour.

Hong Kong is going through the most difficult period in its history. *”What is this pain in the wind and rain? Have no fear. At least we still have dreams. For the sake of the next generation, the “Hong Kong of the world” continues overseas. Let’s save Hong Kong together.

*Note: The lyrics of a Taiwanese song by singer Zheng Zhi-Hua.