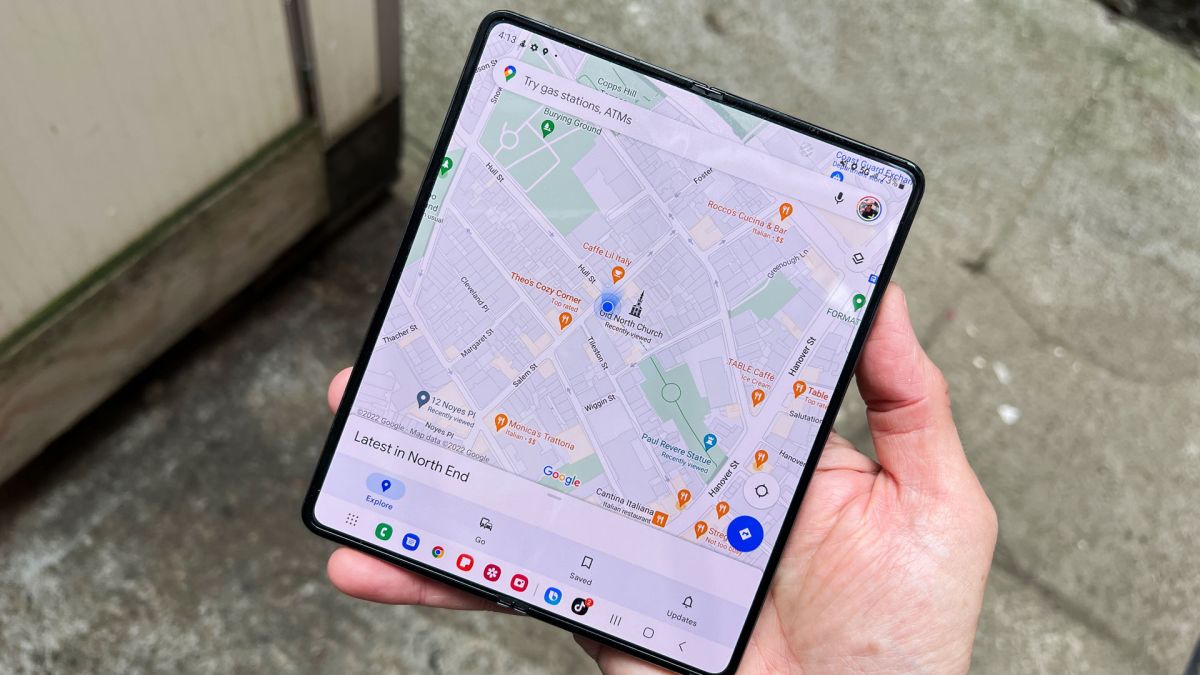 The Samsung Galaxy Z Fold 4’s flexible 7.6-inch foldable display is more than just flashy screen innovation; it’s an incredibly handy tool that on more than one occasion has saved my vacation or, rather, saved me from myself.

After reviewing the Samsung Galaxy Z Fold 4 just before my trip to Boston started, I was already impressed with its build, design, flexibility, and productivity. The phone’s slightly wider and now more usable 6.2-inch cover screen makes the whole device look more normal. But it’s when you roll out the Android 12 device in all its 7.6-inch AMOLED glory that you discover the phone’s potential.

For anyone who’s ever used a tablet – yes, including an iPad mini – this is a “duh” moment. Naturally, a bigger screen means you can see more expansive views of apps like TikTok and Safari than on your favorite flagship smartphone. The Z Fold 4 even supports multiple apps on the same screen. But it was my vacation, what use would I have for a pair (or more) of split-screen apps?

Get the hell out of here

I like to think I have a good sense of direction. I also like to think of myself as 6 feet tall. None of these claims are true, no matter how much I lie to myself. The reality is that I often take the wrong direction, and when I’m on vacation or even on a business trip to an unfamiliar state or country, I get lost.

Before the advent of GPS and turn-by-turn navigation, I relied on maps.

In my case, we had a large flip of them for our county, and if we were planning an out-of-state trip, we brought along several cards that you could unfurl about the size of a typical United States flag. america that you could hoist on a mast above your house.

They were large and unwieldy, but had the advantage of giving you a worldview at a glance of your surroundings or destination. Your head can swivel left to right or up and down to scan miles and miles of terrain. “Zooming” meant bringing your face closer to the map or even using a magnifying glass.

For all their practical impossibility, these ancient maps were useful and used with such frequency that they often wore along the folds until parts of Kansas (sorry, Topeka!) were permanently lost to the ‘wear.

Initially, the advent of the Internet did not mean the end of maps. Instead, we used MapQuest (opens in a new tab) to plan trips, then print maps and detailed step-by-step instructions.

Eventually, later GPS devices and phones killed paper maps for good. On the one hand, hooray, we saved trees. On the other hand, we’ve settled for impossibly small screens to replace our once front-seat-sized paper maps.

When you’re lost, zooming in on a smartphone screen – even a 6.7-inch screen – feels cramped and, to me at least, confusing.

As my wife and I wandered around Boston, a city without a complete and instantly grokable road network, we (or should I say “she”, as in my wife) grew increasingly frustrated with my confusion. I just couldn’t make the right turn, at one point taking us in a full circle around a park without even realizing I had made it.

Finally, I took the Samsung Galaxy Z Fold 4 out of my pocket (no, it’s not heavy or bulky to carry around all day), unfolded it, and opened Google Maps.

Looking at the edge-to-edge display and its full-screen mapping, I instantly felt oriented. There was my blue dot and a pale blue fan indicating my direction on the map. Even holding the tablet-sized screen in one hand, I felt transported to another era, one where I could pull a folded map out of my back pocket, unfold it, and take a look at its large paper surface to quickly get a sense of where I was in the scheme of things.

As we walked and found our way to various destinations, I felt completely unaware of holding the Galaxy Z Fold 4 in my hand and watching as we deftly crossed the deep blue line. Even with a quick glance, I could tell on the big screen when we were getting out of the way.

Getting lost has suddenly become as inconceivable as folding displays once were.

I know what you’re thinking: “This is a borderline case. Every phone has GPS and maps. How often do we travel or, like you, do we get lost?”

It’s just. Most people who buy folding screen devices, especially those that can open up to tablet-sized screens, have probably never used a paper card. Gen Z certainly didn’t. But I think we’re all capable of getting lost, and when you’re confused, looking through a small window (a small phone screen) to see the larger world is unlikely to dispel that confusion.

We are constantly looking for more information. Certainly, our computer use reflects this, as more and more of us use multiple screens at home and in the office. We simply cannot see our entire world through a single laptop, desktop, or even tablet screen.

Phones may look different. As wearable technology, they need to be small enough to fit in a pocket. The trade-off will always be screen size – until it’s not.

Flexible screens mean screens of almost any size can be tucked away in much smaller devices. Once we have them, as they now exist in the Samsung Galaxy Z Fold 4 and Samsung Galaxy Z Flip 4, we’ll find a use for them, as I did with my vacations and Google Maps.

I really don’t know how I’m going to get back to browsing with a small standard smartphone screen.