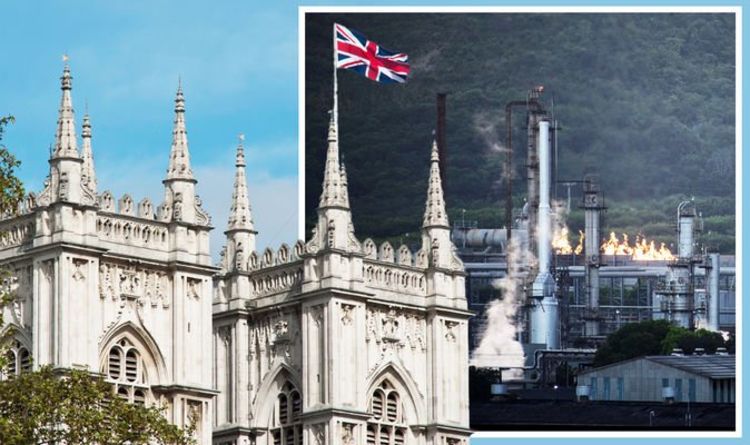 They reveal that the head of a government reconstruction unit held meetings in Caracas to consider UK involvement in the South American country’s energy sector. The redacted documents released to Declassified via a freedom of information request include a record of meetings involving the Foreign Ministry’s Venezuela Reconstruction Unit (VRU).

According to Declassified, the documents reveal details of visits to Caracas and suggest the nature of the UK’s “reconstruction” plans.

Secret plans to overthrow the Venezuelan government have been revealed in unsealed documents. (Image: Getty)

Nicolas Maduro, President of Venezuela, delivers a State of the Union address in Caracas. (Image: Getty)

Declassified reports suggest he then convened a “VRU event”, attended by British Ambassador Andrew Soper and eight unnamed officials, including one from the UK’s Joint Intelligence Organisation.

The Foreign Office told Declassified it has no official notes or records of the event.

Two more meetings were held on February 11 and 12 “to inform the delivery of a Joint Conflict and Stability Analysis (JACS) for Venezuela.”

The JACS, according to the government, is a “strategic assessment used to inform the strategies of the UK’s National Security Council”.

The first day of JACS meetings identified “worst case scenarios and most likely scenarios (political, humanitarian, security and regional)”, in order to reach “consensus on the likely implications for [Her Majesty’s Government] with respect to particular scenarios,” Declassified Reports.

The second day of meetings focused on “UK involvement in the energy sector” of Venezuela. However, the full agenda remains classified for “national security” reasons.

DO NOT MISS :
Princess Charlotte received an adorable gift after Kate’s special visit [REVEALED]
Kate marks a major royal first by joining Prince Charles and Camilla [REPORT]
Putin uses Ukraine as a smokescreen for his real intention in Europe [LATEST]

Supporters of President Nicolas Maduro line up outside the presidential palace in 2019. (Image: Getty)

After the VRU was discovered, Foreign Secretary Wendy Morton told parliament it was made up of a small team, consisting of a leader and three part-time staff, including an external consultant.

She added: “The unit traveled to Venezuela to understand the challenges and determine how the UK could help. The UK Ambassador assured the regime [was] aware of the visit and spoke publicly about the Unit and its staff.”

Jonathan Allen, the British Chargé d’Affaires to the United Nations, claimed in May 2020 that the unit had visited Venezuela twice and obtained visas through the Maduro regime’s embassy in London.

He said the unit has diplomatic relations with the Maduro regime’s foreign ministry.

An anti-government soldier seen with his machine gun taking position ready for battle in 2019. (Image: Getty)

The Venezuelan government rejected the request, complaining to the UN that it was only after the announcement of the unit that the British government acknowledged its existence while trying to find excuses and “justify the unjustifiable”.

Declassified says it is unclear if the government in Caracas was informed that Mr. Saville was visiting as the head of a unit dedicated to rebuilding the Venezuelan economy and convening high-level meetings. level on the UK’s involvement in the country’s energy sector.

To date, the Ministry of Foreign Affairs has not provided evidence that it informed the Venezuelan government of its activities.

The freedom of information response shows that Mr. Saville noted: “I feel with regret that I should decline the comfort of the [UK embassy] Residence.”

Declassified asked the Foreign Office if it had informed the Venezuelan government of discussions in Caracas in February 2020 about UK involvement in Venezuela’s energy sector and whether the VRC still existed.

His spokesman told Declassified and Express.co.uk: “The UK does not recognize Maduro’s regime or consult him on meetings held. The Venezuela Reconstruction Unit no longer exists.”

With additional reporting by Maria Ortega.