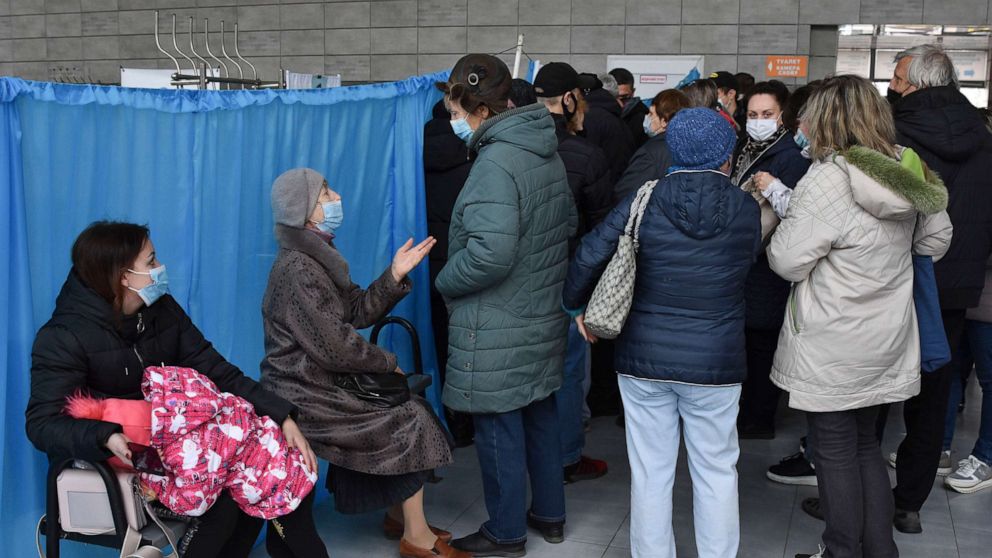 KYIV, Ukraine – It doesn’t take long to buy a fake COVID-19 vaccine certificate in Ukraine. Just typing the words into Google brings up a multitude of ads offering a “without consulting a doctor” certificate.

A potential customer sends their passport details, address, and phone number through the Telegram Messenger app, and the next day, a document showing false proof of vaccination with Pfizer’s coronavirus vaccine arrives in the mail, according to several people who bought one. false certificates, and who spoke to ABC News on condition of anonymity because the practice is illegal. They said prices for the certificates can range from $ 20 to $ 200 (USD), with some going as high as $ 380.

The black market in COVID vaccination certificates is becoming a growing concern in Ukraine, which suffers from a third wave of worsening pandemic amid low numbers of vaccinations and as the government tries to impose restrictions on the unvaccinated . It is unknown how many people have purchased fake certificates in the past, but some Telegram app chains that advertise them have thousands of subscribers.

Svitlana is one of them. She said she bought a fake certificate in September showing she had been vaccinated with the Pfizer / BionTech vaccine.

“I don’t trust the vaccines or the government,” she told ABC News, explaining her decision and declining to give her last name.

Demand for fake vaccine certificates exists despite the ease of getting a free COVID vaccine in Ukraine. At the end of September, there were more than 11 million doses of different coronavirus vaccines in Ukraine for a population of 44.1 million, according to the Ukrainian Ministry of Health. The vaccine is free for all Ukrainians, and in Kiev walk-in vaccination centers are even open in some shopping malls.

But despite the availability of vaccines, Ukraine is among the least vaccinated countries in Europe, with only about 30.2% of the population having received a dose and 14.7% fully vaccinated, according to a vaccine tracker. published by Bloomberg. At the end of September, the Minister of Health Viktor Lyashko declared that 34,000 doses of Pfizer would be abandoned because they had expired.

The low numbers are the product of Ukrainians’ widespread reluctance to get vaccinated: 56% do not plan to be vaccinated at all, according to one Ilko Kucheriv Foundation survey, a well-known independent think tank that conducts sociological studies.

“We are seeing this trend globally, but in Ukraine misinformation about immunization is extremely politicized and is spreading both among the general public and the medical community,” Murat Shahin told ABC News this month. , head of the UNICEF office in Ukraine.

Another problem is the lack of quality medical education on vaccination which leads to incorrect practices and confuses patients, Shahin said.

“We also observe a sub-optimal level of trust in state institutions,” he said. â€œMeanwhile, people trust their loved ones, local leaders and their doctors and nurses. “

Some of the social media channels offering fake vaccine certificates are part of this ecosystem that encourages anti-vaccine sentiment, shares anti-vaccination information and news, while urging people to buy fake certificates to avoid getting hit. vaccinate.

According to the same survey by the Ilko Kucheriv Foundation, some are reluctant because they are not sure about the safety of vaccines. Some of those who spoke to ABC News said they were resisting simply because they had to be vaccinated.

There is no compulsory vaccination in Ukraine except for teachers and civil servants, which means there is little pressure to vaccinate. But some companies are pressuring their employees to get vaccinated, threatening to cut wages or cut vacation days.

And a vaccination certificate is required to travel. Ukraine has created its own digital certificate in an app, called Diya (“Action”) which is valid in EU countries.

Wanting to go abroad, some Ukrainians refuse the free vaccination of the real vaccine and instead pay money for a fake certificate. On a site listing a seller’s phone number, users rated the service.

“We just crossed the border at Rava Russka [in Poland], our border service scanned the certificate and let us go without any problem, â€one wrote. â€œI took him to Germany. Everything worked, â€said another.

Some services provide paper certificates. An official fake stamp is applied using the real names of doctors and clinics, based on samples released by some of the Telegram channels that offer them.

Obtaining digital proof of vaccination without being vaccinated is more difficult. A bribe is always possible, according to some people interviewed by ABC News on condition of anonymity.

Some Ukrainians simply pay doctors to sign their digital vaccination certificates, registering them as vaccinated in Ukraine’s National Immunization Register. After that, a digital certificate appears in the official Diya app, which is also valid in the EU.

Oleksiy Vyskyb, Ukraine’s deputy minister for digital transformation, told ABC News that some doctors are charging fees for falsely entering people’s names in the state register showing citizens who have been vaccinated.

One of the salespeople confirmed this in a Telegram conversation with an ABC reporter posing as a potential customer. ABC News did not buy a fake certificate.

“We put the data in the registry,” replied one person who identified himself as the support manager when the reporter asked how it would work.

Another channel said the clinic where the fake vaccination takes place is “throwing away” two real doses of Pfizer and VaxZevria after claiming the client received them. mind before the vaccine expires two months later. Both options cost around $ 60.

According to some advertisements, you can get a fake vaccination certificate even if you are a foreigner. It will cost a bit more than for a Ukrainian citizen – $ 380 if you are abroad, according to an ad.

Besides being part of an invisible and dangerous group of unvaccinated people who undermine restrictions and spread infection, those who buy fake certificates may not be able to get a shot later because they are already registered as having received one in the state registry, Shahin said.

Ukrainian authorities say they are now trying to crack down on the practice. Ukraine’s security service, the SBU, as well as the country’s cyber police, said they have opened nearly 500 criminal cases relating to the sale of fake paper vaccination certificates and that more than 50 web resources have been blocked. So far, only three cases have been opened against doctors for allegedly entering false information into the register. Those detained face up to six years in prison. But the government says it wants to increase the penalty.

This week, Ukraine imposed a full lockdown in four regions as Ukraine’s daily numbers continue to worsen, recently reaching their highest level since the country’s second wave in the spring. Ukrainian authorities have reported 22,415 new confirmed infections and 546 deaths in the past 24 hours, the highest number since the start of the pandemic. Most experts also believe that the true number of cases and deaths is likely higher, as not all are recorded with testing.

She said the industry of fake COVID vaccine certificates is also threatening Ukraine’s international image, as Ukraine was among the first non-European Union countries to have its vaccine pass recognized. national by the EU to travel.

“EU countries expect transparency and honesty in the use of these documents,” she said.